The Company’s strategy to focus on its core markets continues to generate sales growth and substantial improvements in financial performance.

Sales increased 4% to a record $9.03 million for the year, led by strong growth in sales of CASA (Computer Assisted Sperm Analysis) products and LYKOS® clinical laser systems, as well as increased revenues from after sale services and a growing contribution from its newly acquired Oosight® product line. Fourth quarter sales grew 4% to $2.63 million versus the same quarter in the prior year, the thirteenth consecutive quarter of growth. For the year, the Company reported net income of $1.03 million, a 20% increase over the prior year, EBITDA of $1.39 million and EPS of $0.02 per share. Cash flow from operations increased to $1.06 million, up 58% for the year, and total cash at December 31, 2015 increased to $4.3 million.

“We are pleased to have achieved year over year sales growth in this difficult foreign exchange environment,” said David Wolf, President and Chief Executive Officer of Hamilton Thorne Ltd. “Moreover, while we continued to invest in aggressive promotions in the second half of the year, resulting in over 10% unit growth, we feel very good about our ability to maintain our gross profit margin for the year at 63.8% with increased sales of high-margin software, consumables and services with recurring revenues. To accelerate our sales growth, we have committed to substantial investments in research and development projects, expanding our sales and marketing reach, and putting more energy into our acquisition program.”

Mr. Wolf added, “Due to continued currency issues as well as concerns about the overall economy in certain of our markets, we are forecasting that the first half of the year will be flat, with sales growth increasing in the second half as our investments in R&D and sales and marketing bear fruit; however, accelerated net income and EBITDA growth will be a challenge until the effects of our investments are realized. With over $1 million of positive cash flow from operations, further enhanced by our June equity financing and the proceeds from options and warrants exercised during the year, we improved our year-end cash position from $1.6 million to $4.3 million and we are well positioned to continue investing for growth through the acceleration of our acquisition program.” 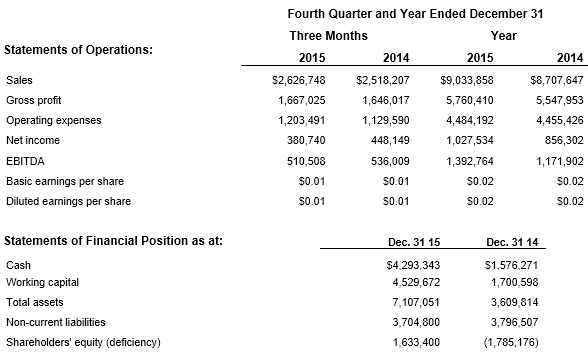 All amounts are in US dollars, unless specified otherwise, and results, with the exception of EBITDA, are expressed in accordance with the International Financial Reporting Standards ("IFRS").

Hamilton Thorne sales increased 3.7% to $9,033,858 for the year-ended December 31, 2015, an increase of $326,211 from $8,707,647 during the previous year. This increase was attributable to sales growth of the Company’s imaging and LYKOS systems into the ART market, partially offset by declines in research systems sales.

Gross profit for the year increased 3.8% to $5,760,410, compared to $5,547,953 in the previous year. Gross profit as a percentage of sales was stable at 63.8% for 2015 versus 63.7% for the year-ended December 31, 2014.
Operating expenses increased 0.6% or $28,766, to $4,484,192, up from $4,455,426 for the previous year. These increases in operating expenses are a result of increased staffing and compensation, primarily share-based compensation expense, as well as continued strategic investments in R&D, partially offset by small decreases in sales and marketing and general and administrative spending. Operating expenses as a percentage of revenue were reduced to 49.6% from 51.2% for the prior year.

Net income increased 20% to $1,027,534 versus net income of $856,302 for the prior year, an improvement of $171,232. Net income improved due to the leveraging of revenue and gross profit growth with controlled growth in operating expenses.
EBITDA increased 19% to $1,392,764 versus $1,171,902 in the prior year, due to revenue and gross profit growth and controlled growth in operating expenses.

Sales were up 4.3% from $2,518,207 to $2,626,748 for the three months ended December 31, 2015. Gross profit was up 1.3% to $1,667,025, while gross profit as a percentage of sales was down 1.9% at 63.5% versus 65.4% in the previous year largely due to product mix and some increased sales price discounting. Operating expenses were up $73,901 or 6.5% as a result of increases in R&D staffing and compensation costs, and sales and marketing expenses, partially offset by reduced general and administrative expenses. In the fourth quarter of 2015, the Company generated net income of $380,740, and EBITDA of $510,508, versus net income of $448,149 and EBITDA of $536,009, for the prior year fourth quarter. This decrease was due primarily to increased operating expenses and $24,890 of foreign exchanges costs attributable to the Company’s functional currency structure, partially offset by increased sales and gross profits.

Financial Statements and accompanying Management Discussion and Analysis for the periods are available on www.sedar.com and the Hamilton Thorne website.

Neither the Toronto Venture Exchange, nor its regulation services provider (as that term is defined in the policies of the exchange), accepts responsibility for the adequacy or accuracy of this release.

The Company has included earnings before interest, income taxes, depreciation and amortization, certain non-recurring expenses and certain other non-cash amounts (“EBITDA”) as a non-IFRS measure, which is used by management as a measure of financial performance. See section entitled “Non-IFRS Measures” in the Company’s Management Discussion and Analysis for the periods covered for further information.